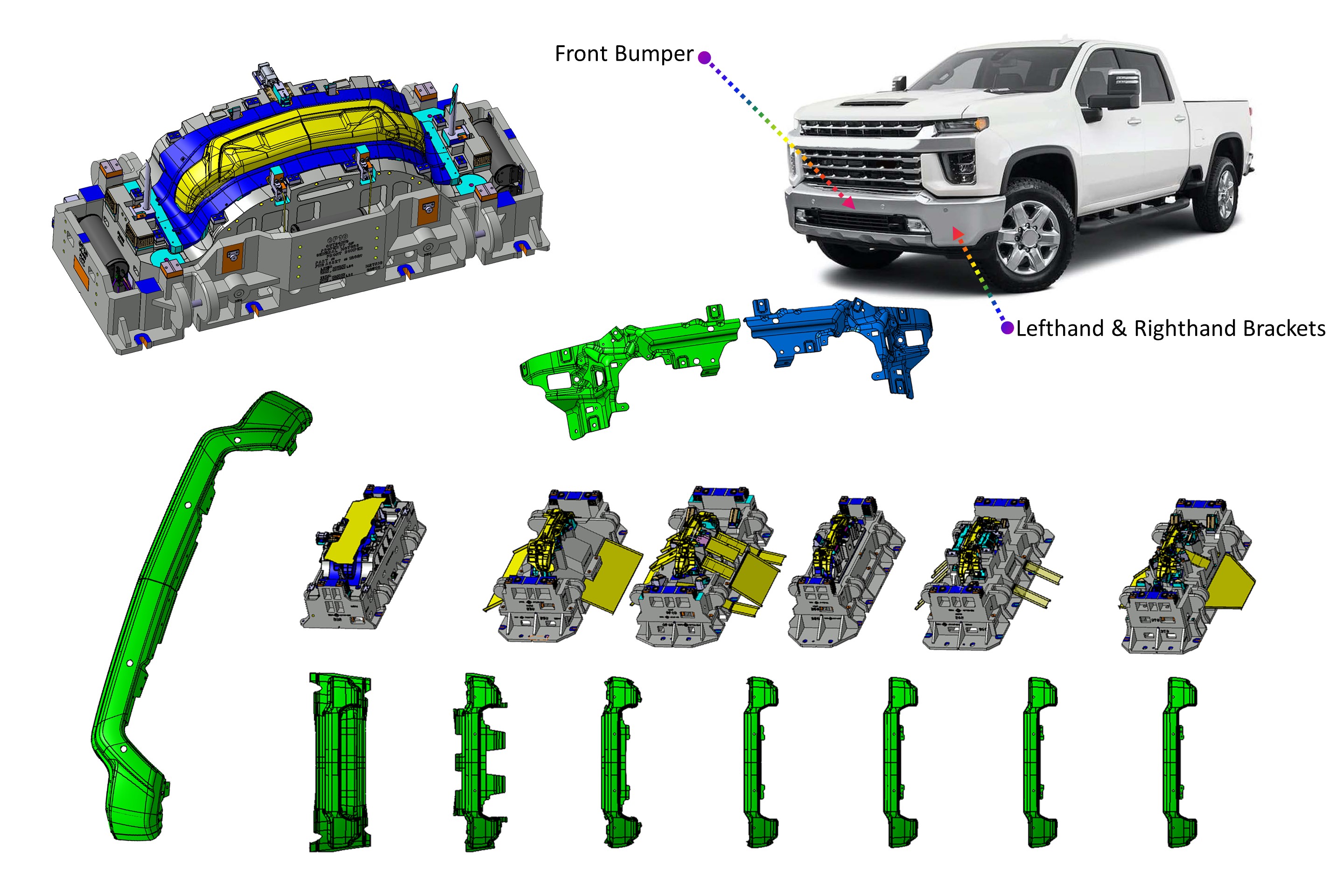 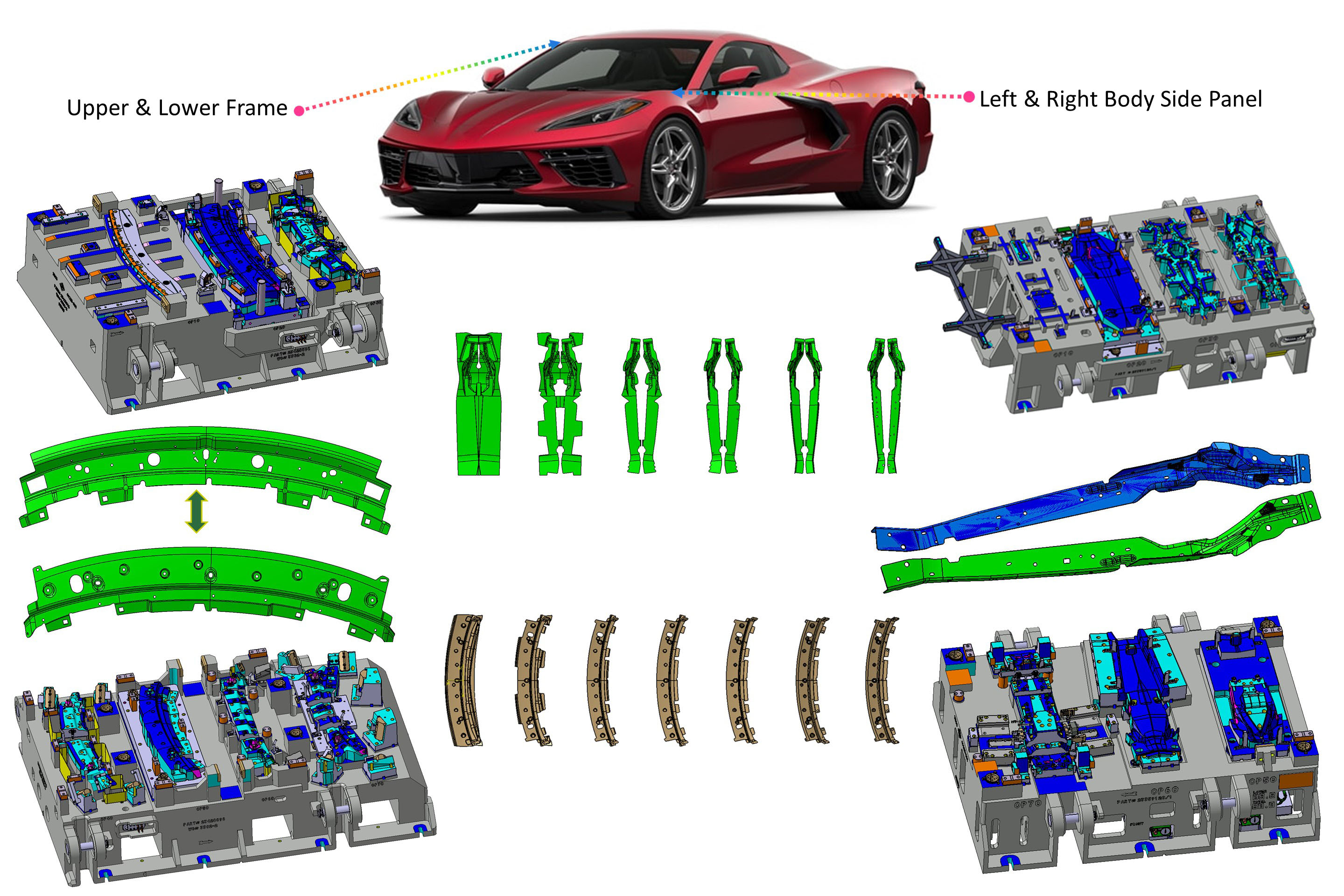 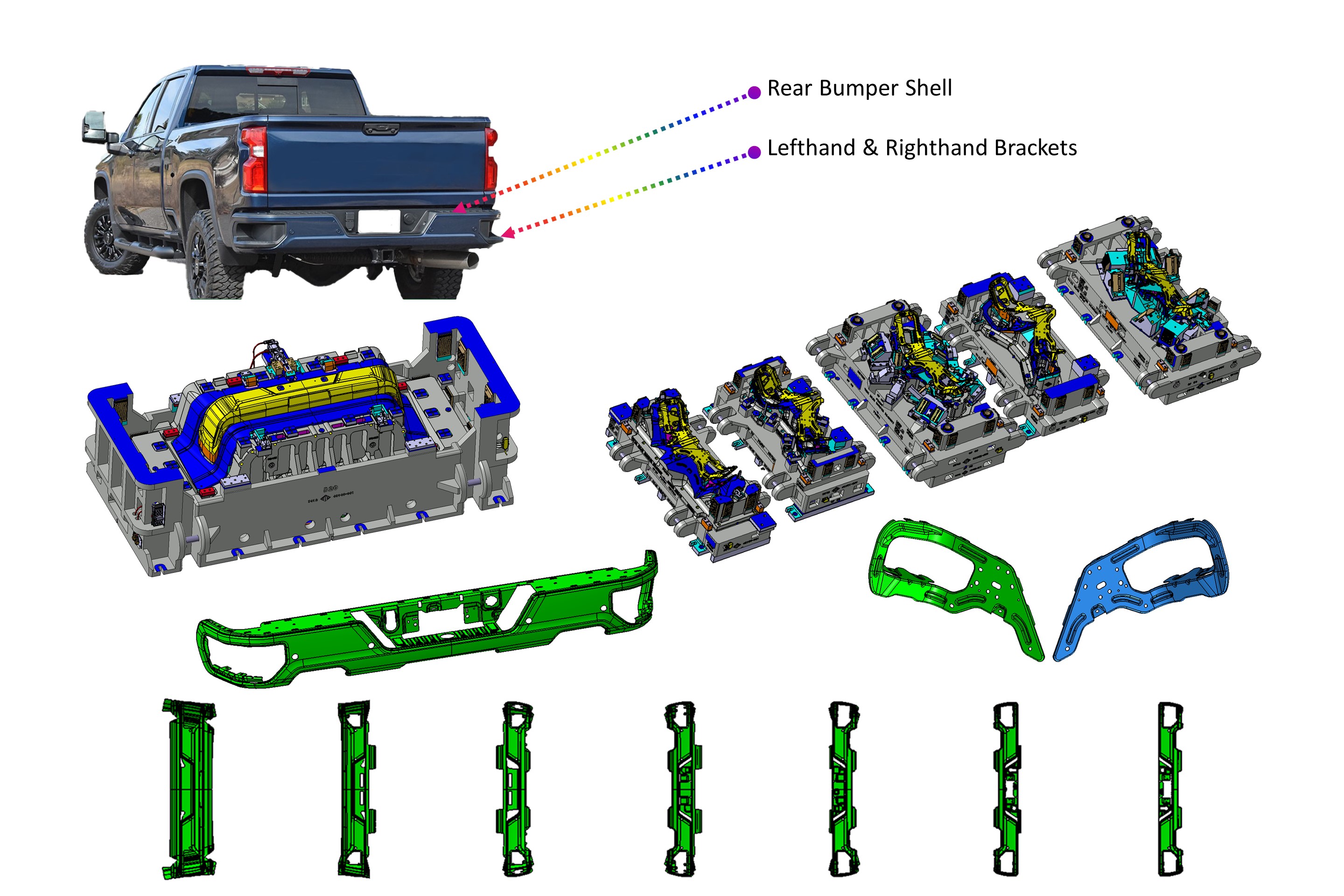 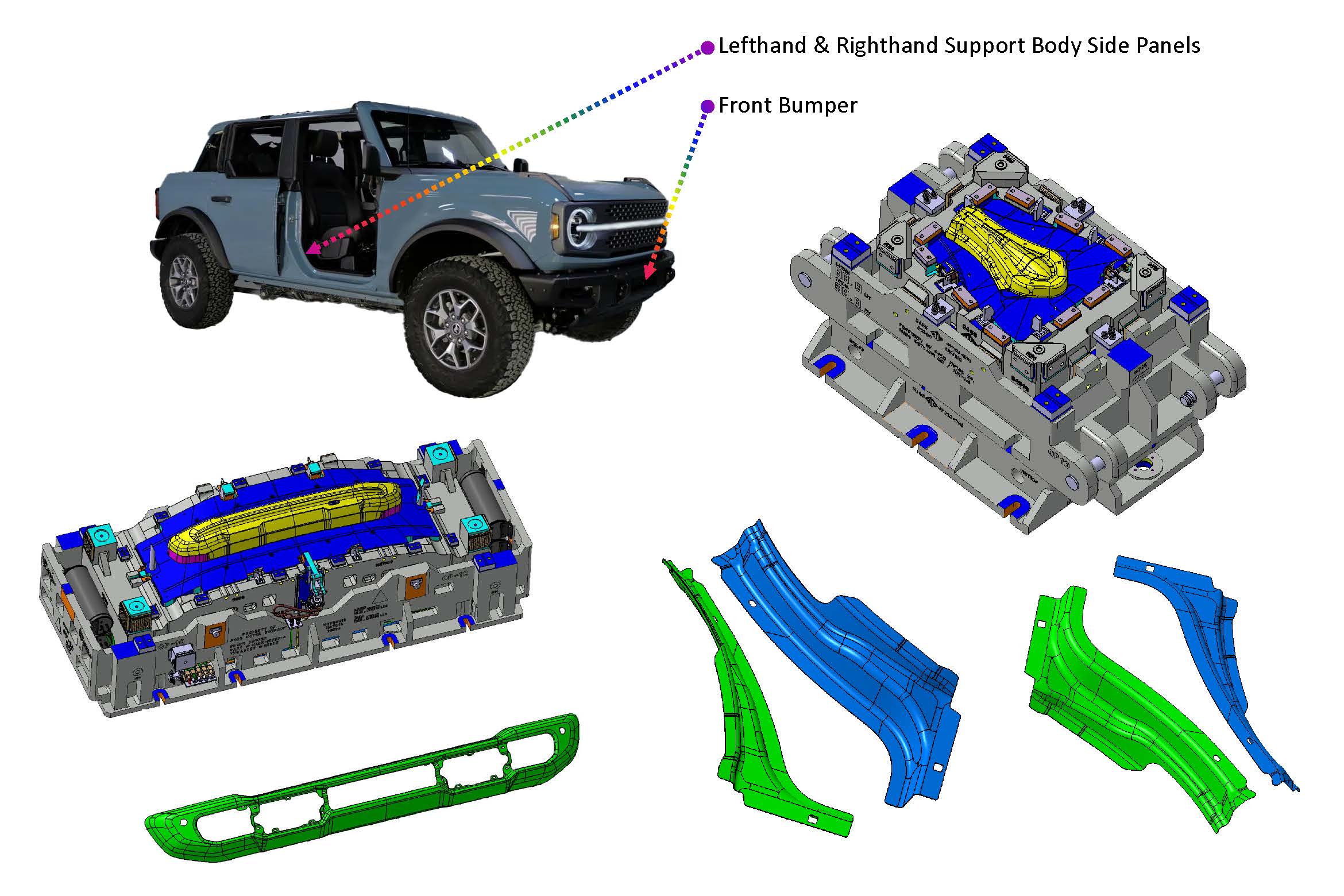 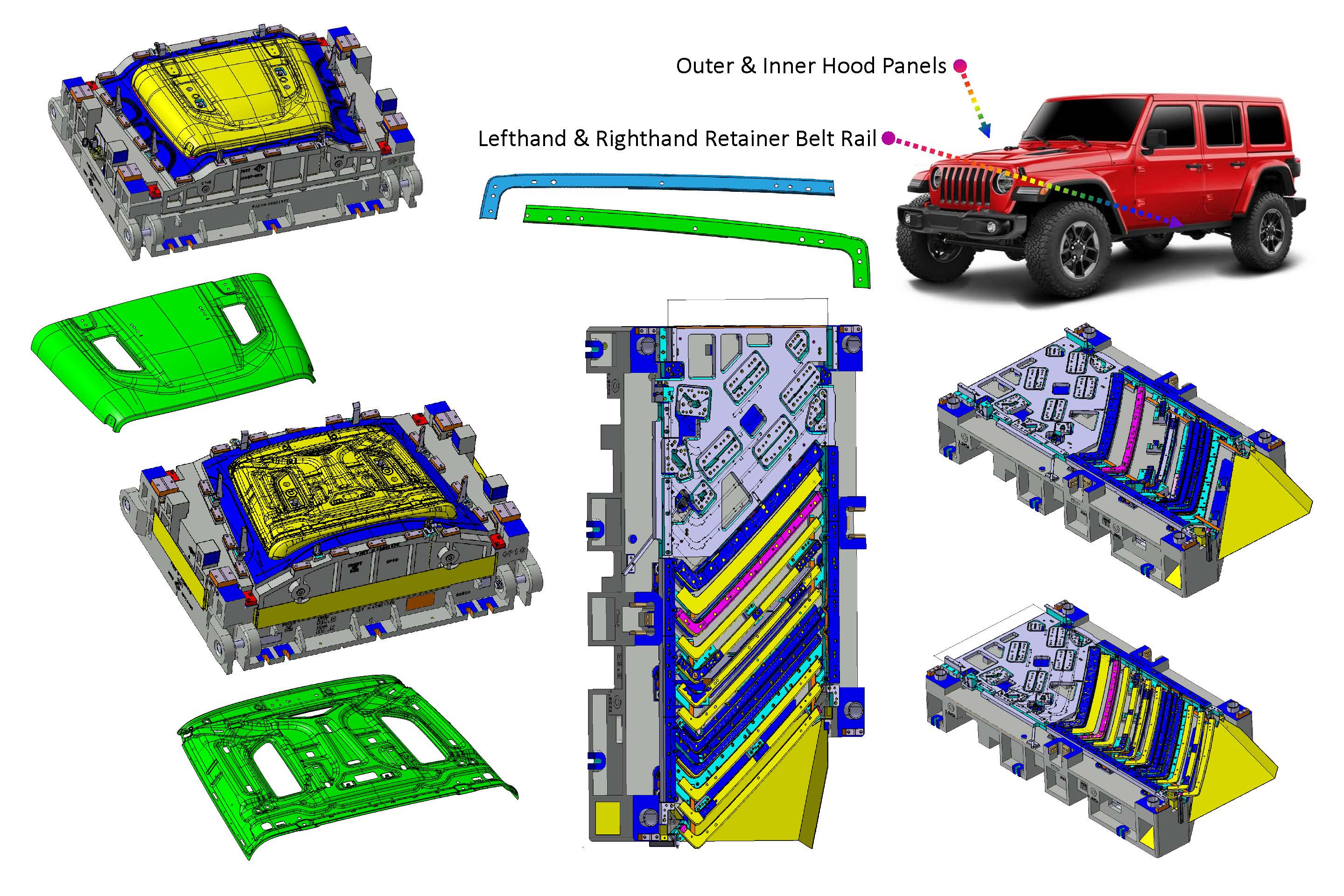 Our high quality, close tolerance tooling includes line dies, progressive dies, and transfer dies for any industry. Greenville Tool & Die is experienced with the development of tooling for parts designed for advanced high strength and dual phase materials. Our tryout capabilities span to over 2,100 in sizes to 96" wide x 240" long. We are experts in the design and building of all types of metal stamping dies including draw dies, tube dies, blank dies, pierce dies, trim dies, and form dies.

Line Die - Line dies are used to make low-volume parts not requiring an automated tool or die. They may also be used to make large parts which are not practical to be run from several dies in a single press. These parts are then often run in "tandem line" presses combining automation to automatically move the parts between these presses 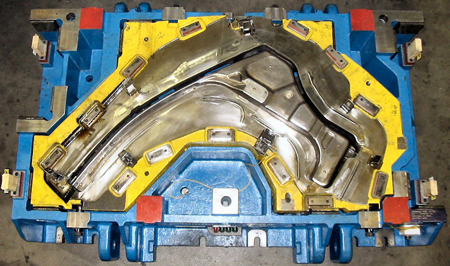 Progressive Die - for higher volume parts needing to run automatically at high rates of speed (strokes per minute). Greenville Tool & Die has designed and built hundreds of progressive dies for parts with a wide range of material thicknesses and coil widths. We also design to fit your press(es). We can also design to do curling and hemming. We can provide progressive dies to handle material thicknesses from as thick as 5.0mm (.200") high strength steel to as thin as 0.25mm (.010") thick aluminum and stainless steel.

Material thicknesses range from .254mm (.010") aluminum to 5mm (.200") steel. Greenville Tool & Die can design and build your transfer bars and fingers to fit your transfer system, or we can work with your automation supplier to integrate these with the dies we are designing and building for you. We also have experience with the building of gravity fed scrap removal systems either of shaker or conveyor type for through the press bolster, or off the edge of the bolster. 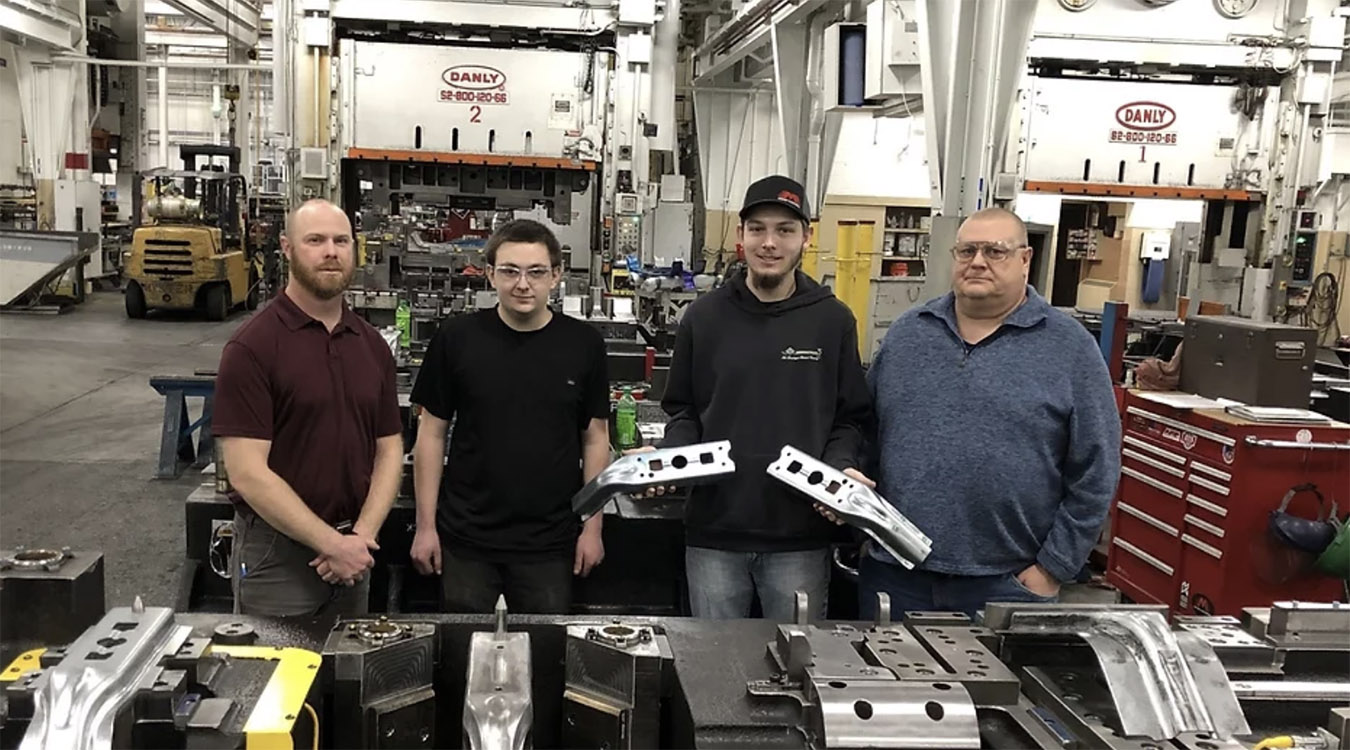 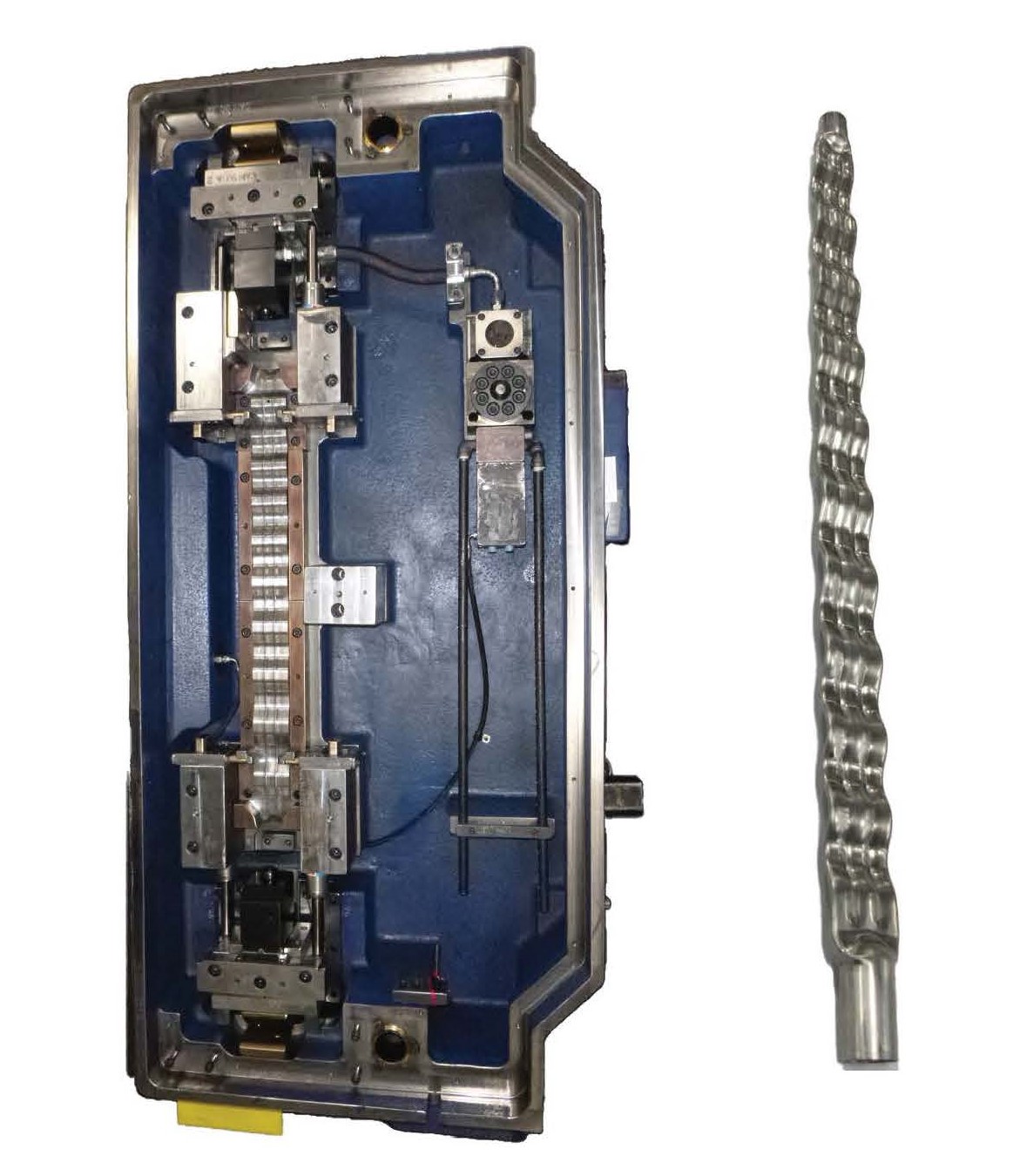 Automotive and other manufacturers have been investigating processes which reduce weight in their product, save material costs, speed production procedures, and still allow use of existing production stamping presses. After months of development, Greenville Tool & Die Company received a patent in May 1997 on our process called "Liquid Impact Tool Forming Mold," or LIF. This process, which is similar to "hydro-forming," is applicable to tubular parts. In addition to the advantages of weight reduction and material savings, LIF also allows normal stamping press cycle times, eliminates spot welding, reduces scrap, produces parts with more integrity, and promotes less total parts in an assembly. This patented process has also been proven to hold tighter tolerances than traditional metal stamping dies.

This process starts with a preformed tube with specially chamfered ends. It requires pre-bent tubes and a preform die. The preformed tube is then loaded into the Liquid Impact Forming Die which is filled with a non-corrosive lubricating fluid. Proximity switches sense proper location of the tube before the press can cycle. The tube fills with fluid and the ends are capped with a special sealing device as the press cycles. During cycling the tube is pressurized and formed. Upon completion, the pressure is mechanically released, and the part is removed from the die. The internal pressure is fully adjustable and can be released at any point near the bottom of the stroke.

What you should know about Liquid Impact Forming

A: LIF is a similar process to hydro-forming except parts are produced in an existing mechanical stamping press and are not required to pause on bottom of stroke. 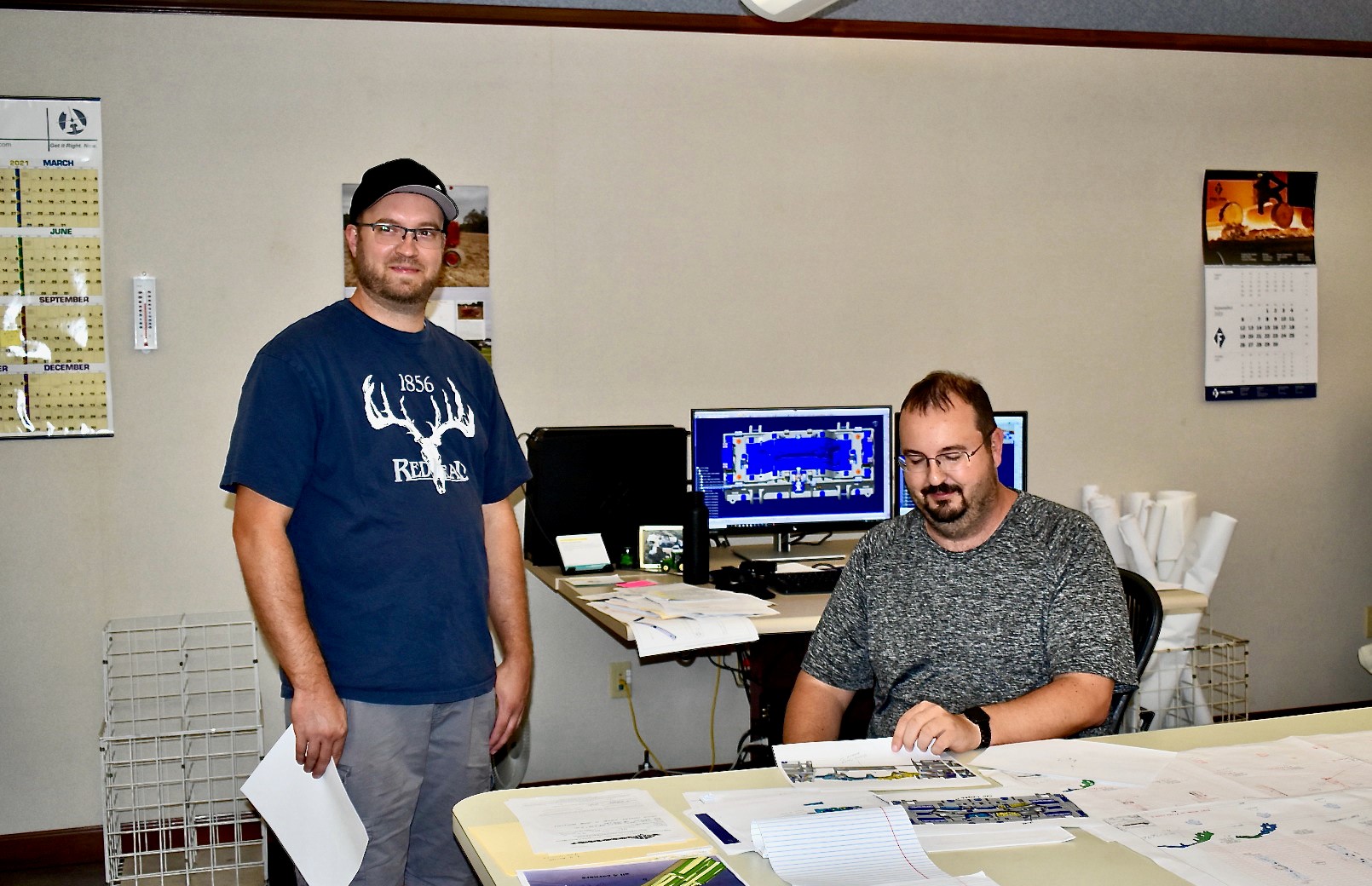 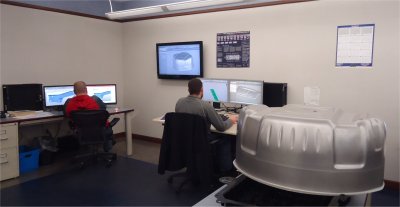 Before assembly, every die detail is individually CNC Machined to precise specifications. This offers you the most cost-effective approach to your die repair needs by allowing replacement of individual steels rather than having to ship the entire die back to us. Our milling needs are handled by a wide range of machines: 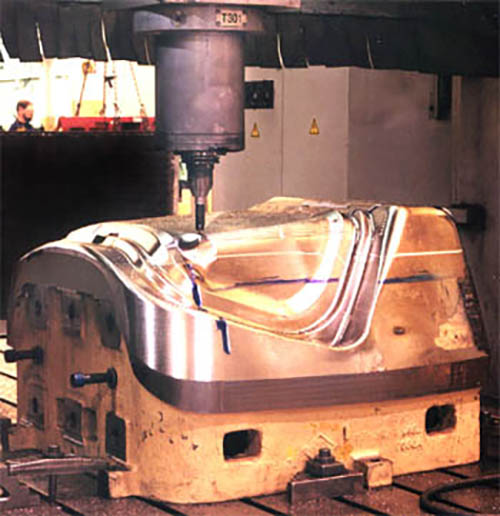 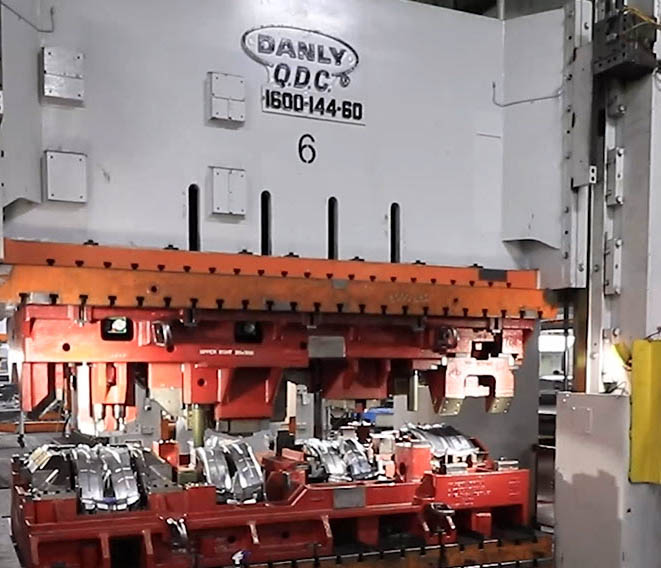 We have the tryout press capability to match our customers' needs. Computerized Autoform die simulation software facilitates the tryout process. Capability studies are conducted to ensure the customer's quality standards are met.

We are very experienced with both advanced high strength and dual phase materials and have tryout capabilities to over 2,100 tons accommodating dies up to 96" wide X 240" long. Simple and complex progressive dies from 24" X 36" to 72" X 200" and weighing more than 25 tons may have up to 6" draw depths and 12" - 15" pitches. We build 3-9 station transfer dies requiring ram tonnages to over 2,100 tons and up to 30 strokes per minute. Traditional transfer as well as walking beam type including servo drive control.

Our top priority is satisfying the customer with quality and delivery, and GTD personnel fully understand that "the customer always comes first." Our highly skilled craftsmen are known for their ability to work with the customer through all stages of a project. Capability studies conducted during the tryout process ensure that the customer's quality standards are met. To aid us in providing our customers with the highest quality, we utilize: 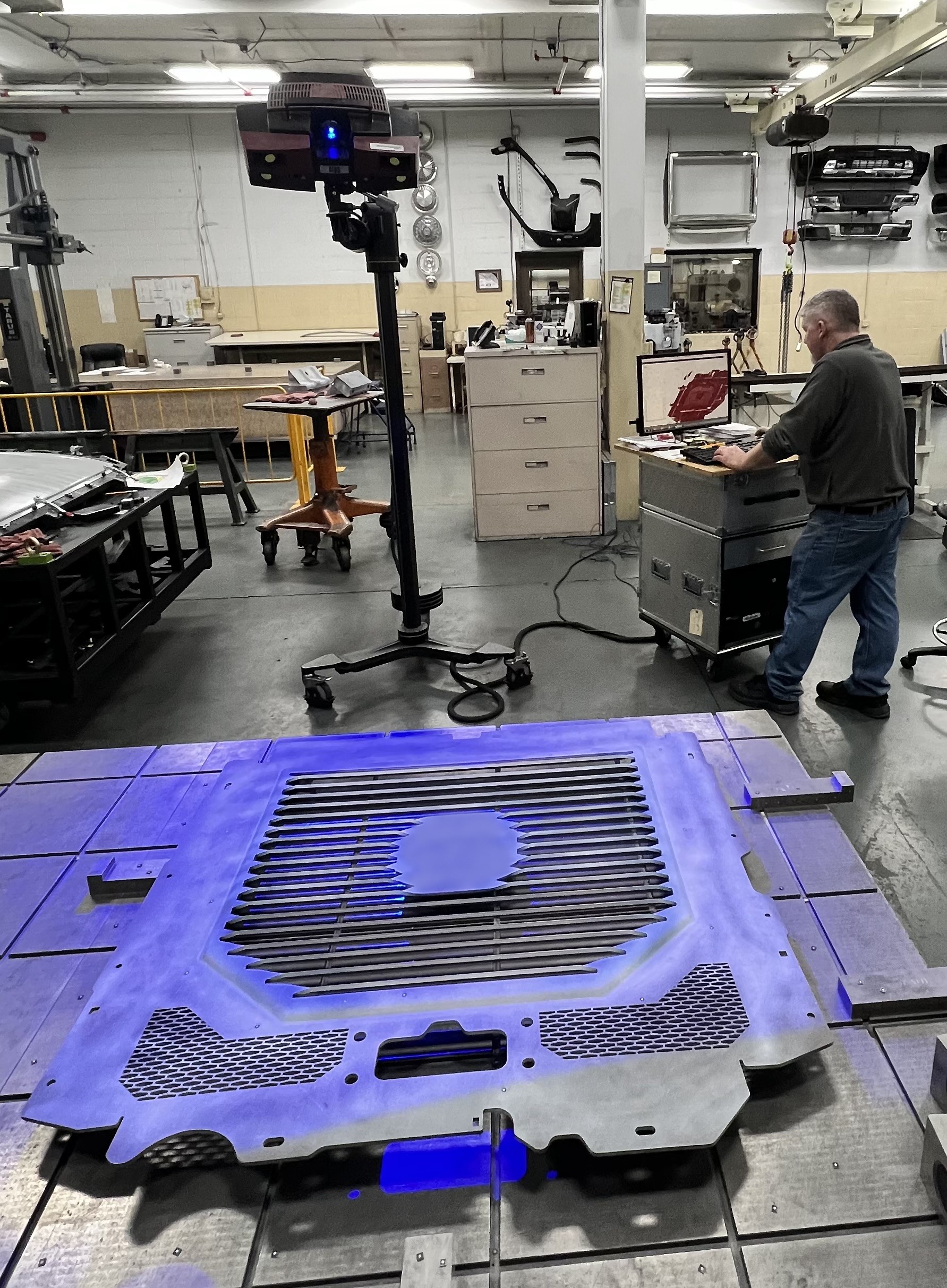